Matcha powder refers to finely-milled green tea, which is the most-consumed and popular tea in Japan.  Matcha possesses many health benefits, like boosting metabolism, reducing cholesterol levels and so on. 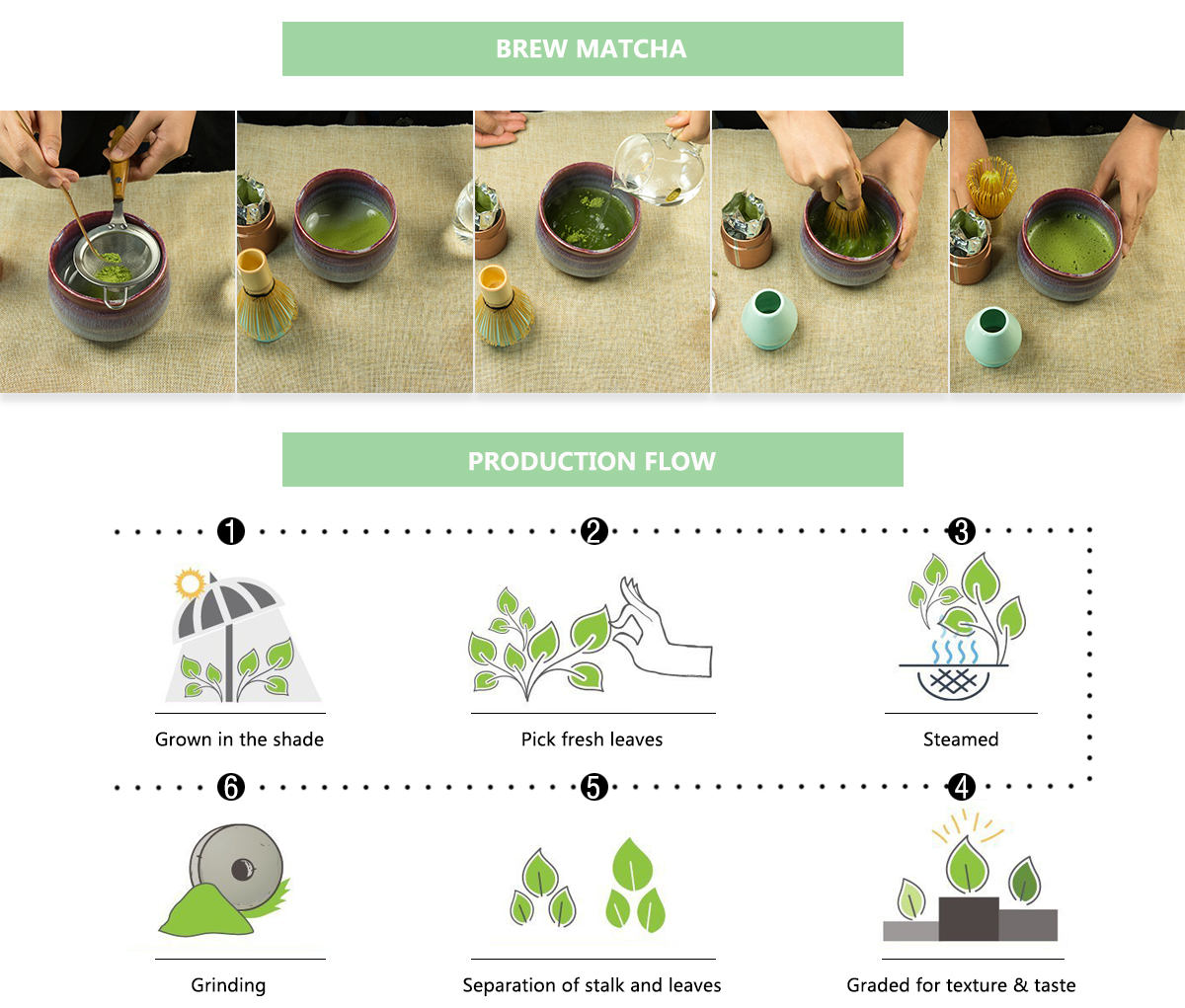 Matcha powder is one of the oldest tea sorts in China then promoted in Japan and produced from stone-ground shade-grown leaves to form a fine green powder. While matcha powder and green tea seem quite similar, they have distinct differences in texture, flavor, and color. Matcha separates itself from ordinary green teas in the way it is cultivated and processed. The tea leaves are ripened in sheltered plantations then ground to a fine green powder using traditional granite grind-stone mortars. Only the best and finest organic quality leaves are utilized, with the leaf skeleton and stem being discarded. For many individuals, the matcha powder is often to sour on its own and thus, the powder has commonly been used in green tea beverages as well as a variety of other foods such as matcha cupcakes and ice-cream.

The energy inducing effects of this powder have been steeped in history, far predating this generation. Samurai warriors were seemingly accustomed to the beverage particularly before heading into battle due to its energizing properties. Similarly, modern-day scientist posits matcha powder as being some sort of wonder supplement. Not only does it have a positive effect on mood and cognition but the blend of L-theanine and caffeine also improves alertness. Seeing as the powder is crafted from high-quality tea and utilizes the whole leaves, it is a more effective source of nutrients than other traditional sorts of tea. It contains approximately 15 times more active ingredients than any other conventional forms of green tea.

In addition, caffeine found in other beverages is different from that in matcha. A typical cup of caffeine can be absorbed in merely 30 minutes, which can lead to addiction just to maintain the same levels of alertness. Matcha contains amino acids that not only curb the effects of caffeine in your body but also provide the higher levels of energy, focus, and concentration for longer periods of time. Despite not being labeled as an energy drink, matcha can actually become a source of sustained energy as the flavonoids infused into it promote calmness and focus. Additionally, the catechin and caffeine combination was also found to stimulate the nervous system, which is said to accelerate your metabolism by fat oxidation and burning stored energy.

Rich in antioxidants known as polyphenols, matcha powder also provides dashes of small minerals and vitamins which prevent hypertension, aging and heart disease. The antioxidants help to detox and purify the body subsequently ridding it of the impurities that make you feel weak and sluggish. Research also revealed the polyphenol EGCG found in the powder actually boosts metabolism by assisting the body to digest all the nutrients and sustain its optimal weight. This makes you feel more active and alive, with fewer calories ingested.

In summary, it can be said that whether in powder form or as a beverage, matcha has positive all round effects on the metabolism rate and overall energy levels. The wide range of possibilities matcha powder proffers also makes it easier to incorporate it into your diet trends with studies showing a positive correlation between the powder and general wellbeing.

Guangzhou Runming Tea has teams of skillful, experienced sales staff with over 10 years experience in tea and exporting.

Having our own tea plantation bases and preliminary factories in the famous tea-growing areas in China, we strictly control over every tea-making process to guarantee our Maocha’s quality, taste, aroma & appearance.

Besides, we also have our own high sanitation, traceable tea refined factory in Guangzhou, including the packing workshop, pyramid tea bag OEM workshop, Matcha To Go OEM workshop, etc. For the health of human, we always advocate organic life attitude, and devote to be the advocator and leader of organic teas.

Pls feel free to contact us if you have any questions/inquiries. We look forward to hearing from you!