How Is Blooming Tea Made?

Blooming tea, which is also commonly known as flowering tea is a unique kind of tea that is just a combination of edible flowers and tea leaves that is purposely wrapped in the shape of ball. However, that combination in itself is not the reason that makes this tea exceptionally interesting, but the way it is presenting itself once it is steeped. Once the unassuming ball-shaped tea makes contact with hot water, it majestically unfurls itself in real-time, which makes it look like a flower blossoming in springtime, hence where it ultimately got its name. Of course, you need to steep it in a tall clear glass to fully enjoy the "blooming" process.

Where did blooming tea originate?

Blooming tea, along with many other tea variants, is widely believed to have originated in China. However, the exact year when it was created is still up for debate. Some say that it's a brain-child of modern tea enthusiasts but some argue as well that its origins could be traced back hundreds of years ago, going back so far to 10th century China where it was believed to be used for displays in royal courts rather than as a beverage. But if there is one thing that is clear, it is the fact that it was first seen in Yunnan province, which is located in the far southeast of China. Yunnan province is also known to be the origin of different types of tea such as Pu-erh and Dian Hong, which is still primarily produced there today. 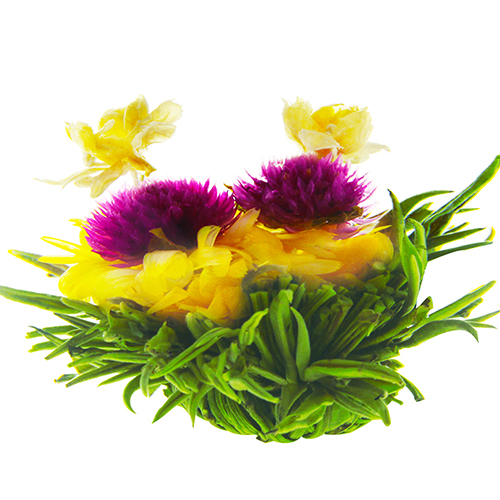 How is blooming tea made?

Blooming tea can be made from different edible flowers such as lily, globe amaranth, jasmine, marigold, or carnation where the claimed beneficial effects could vary depending on the type of flower used.

At first, fresh silver tea needles or buds, usually the green or white ones, are carefully sewn along with the fresh flowers and then turned into a ball by those skillful tea artisans in China. The sewing process is highly important as it is where the blooming tea is shaped and one wrong move could mean that the tea could not bloom into its intended shape if it could bloom at all.

Once the sewing is done, the now ball-shaped tea is then wrapped with cotton yarn and initially baked to remove the existing moisture of the fresh ingredients. After the initial baking, flavoring is then added to the ball-shaped tea, which is typically jasmine or mango but this step is mostly optional. It is then baked further for at least five more times before it will be individually sealed and packaged to ensure that its intended quality and taste won't be affected. Since different flowers could be used in making this type of tea, it is a given that there will be different flavors and blooming designs depending on what type of flower was sewn with the tea buds.

Blooming tea is known for its unique appearance and not for its flavor. Typically, it is described by many as having a neutral flavor, which is somewhat floral or vegetal in nature, since it uses flowers in the first place. However, to compensate for this lack of flavor, some artisans opt to add extra flavoring or scent in order to enhance its taste.